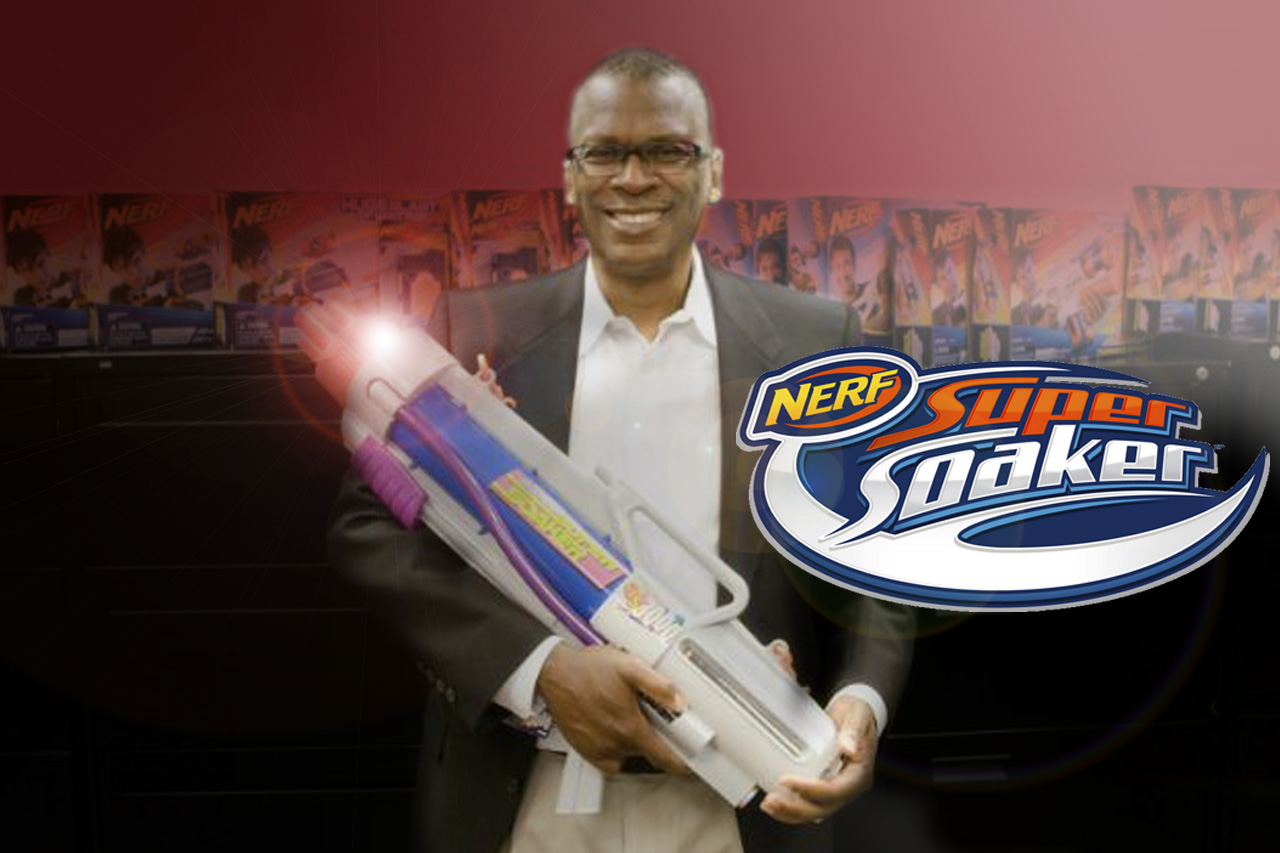 Press Release – ATLANTA (August 15 , 2020) – Dr. Lonnie Johnson might be one of the most brilliant inventors of our time. The scientist and engineer is responsible for over 100 patents, including a thermoelectric energy convertor and a thin film lithium battery. But his most famous invention? One of the best toys of the 20th century, the Super Soaker. And it came to existence all thanks to an accidental discovery.

It was all thanks to an accident

“When I came up for the idea for the water gun, I was working on something else,” Johnson recalls. “I was working on a new idea for a heat pump that would use water as a working fluid instead of Freon.” At the time, there was concern about how the continuous use of Freon would impact the environment, so Johnson set out to see if he could develop a refrigeration system that used water, instead.

“I was experimenting with some nozzles that I machined, and I shot a stream of water across the bathroom and I thought, ‘Geez, maybe I should put this hard science stuff aside and work on something fun like a water gun. Maybe I could get enough money to support my habit,” Johnson recalls.

This wasn’t the engineer’s first foray into toy-making. “When I was a kid, I always wanted to make a better toy, something I enjoyed playing with,” he remembers.

He had been making toys since he was a kid

One of his earliest toy creations was building chinaberry guns with his friends using a mop and hollowed-out bamboo tubing. This would foreshadow a later (very popular) invention.

“That was actually the first Nerf gun, before Nerf came out,” Johnson says. “I was using compressed air to shoot chinaberries.”Oh, did we mention that he also invented the Nerf gun? “Some of my most famous patents are for the Nerf guns and Super Soakers,” Johnson says. “For the N-Strike Nerf product line, those guns were all based on my patents … Super Soaker, of course, that entire line started as a result of my invention.”

Johnson considers himself a lifelong tinkerer.

“I’ve been an inventor, I think, for all my life,” Johnson says. “Ever since I was a small kid, I used to tinker and make little toys and things … I built a go-cart, windmills, just a lot, rockets.”

One of his proudest inventions to date is a robot he built in high school. Johnson attended the all-Black Williamson High School in Mobile, Alabama, and presented his robot — named “Linex” — at a local Junior Engineering science fair held at the University of Alabama. His team represented the only Black school at the fair. The year was 1968, only five years after a federal district court ordered the University of Alabama to admit Black students Vivian Malone and James Hood. Governor George Wallace, who earlier that year had declared, “Segregation now, segregation tomorrow, segregation forever,” stood in the doorway of Foster Auditorium, causing a showdown with federal authorities.

“When I grew up in Alabama back then, everything was still very segregated,” Johnson recalls. “The people that I interacted with on a daily basis were primarily Black, my teachers were all Black, so racism and being treated unfairly was never a part of my daily activity or consideration.”

“So, when we went to the University of Alabama, that was a totally different environment, everyone there was White except for us, and the fact that I was there with my robot to me was a victory in itself.” That wasn’t the only victory he would walk away with that day — Johnson, and Linex, were awarded first place.

He attended Tuskegee University on a scholarship

After high school, Johnson attended Tuskegee University, graduating with a bachelor’s in mechanical engineering and a master’s in nuclear engineering. One of his first jobs after school was at Oak Ridge National Laboratory, working on cooling systems for nuclear reactors.

“I was working alongside a guy who had the same level of engineering I had, he had a master’s degree and he had graduated from Penn State and he was White, of course,” Johnson remembers. “And, it turns out, I was doing a better job than he was. Since then, I’ve always felt very good about my education at Tuskegee.”

Johnson went on to join the Air Force, which would eventually lead him to his time at NASA.

He worked on the Galileo spacecraft that was sent to Jupiter

He worked on the Galileo spacecraft that was sent to Jupiter

“After I had done some analysis for the Air Force, I predicted some things that NASA had gone on record to say could not happen,” Johnson says. “I proved NASA’s prediction to be not totally accurate, that’s when I got offered the job at Jet Propulsion Laboratory in Pasadena, and there I went to work on the Galileo spacecraft as a power systems engineer.”

During his time at NASA, he developed a pivotal power supply mechanism for the Galileo spacecraft that was deployed to study Jupiter and its moons.

“It was an invention that my fellow engineers said would not work,” Johnson remembers. “I got that working, got that on the spacecraft, and many of them came up to me to apologize for the things they were saying about my idea … That to me was a major moral victory, to think, I’ve arrived, now I’m a real engineer.”

He spent days working on the Stealth Bomber, and nights on the Super Soaker

It was also around that time that he got the initial idea for the Super Soaker. Johnson left NASA to go back to active duty with the Air Force, all the while tinkering with water gun prototypes.

“That was when I was working on the water gun in my basement after work in the evenings,” Johnson remembers. “Then, I left there and went out to Edwards Air Force Base, worked on the Stealth Bomber program back when it was highly classified, and nobody knew that it existed. I actually couldn’t tell my wife what I was working on in the daytime, it was that top secret.”

While Johnson’s creative and technical genius may strike at any time, there is a lot that goes into taking a spark of discovery and turning it into something that is ready for the world.

There were a few Super Soaker prototypes that were never sold

So, were there any Super Soaker ideas that didn’t make it?

“I developed a system where after you’ve finished shooting the gun, you could just stick it into a pool of water or a bucket and press a button and it would automatically suck the water in and you’re good to go again,” Johnson remembers. “It was a quick refill, self-refilling water gun. That one really never made it to the market.”

Today, Johnson is working to encourage students to pursue their interests in STEM. He has partnered with 100 Black Men of Atlanta and FIRST Robotics to introduce more students to engineering and technology.

“One of the things I really relate to is people saw my interest in engineering very early and they nurtured that, they cultivated that,” Johnson remembers. “I think the earlier we can get kids interested and the more we can give positive feedback as opposed to criticism, the more likely we are to see kids grow up to be successful, I believe very strongly in that.”

He is also continuing to tinker with new inventions with his team at Johnson Battery Technologies.

Today, he is working on a project with NASA

“Inventing is what I do,” Johnson says.

He is currently working with NASA on a heat-to-electric energy convertor, as well as working on a lithium-air battery, which, if successful, Johnson believes could have the capacity to hold 10 times the energy of a lithium ion battery.
Still, he knows that people will forever remember him for his contributions to their childhood.

“I find it curious that people seem to make a big fuss about me and the Super Soaker and I’m still trying to get used to that,” Johnson says. “I come to work, I try to invent and develop new things to solve problems. There’s an expression that says, ‘Need is the mother of invention,’ so I look for really good problems to solve. That’s what I do.”

Hear Dr. Lonnie Johnson’s tell his story in the latest episode of Great Big Story, a new podcast from CNN about the surprising stories all around us.