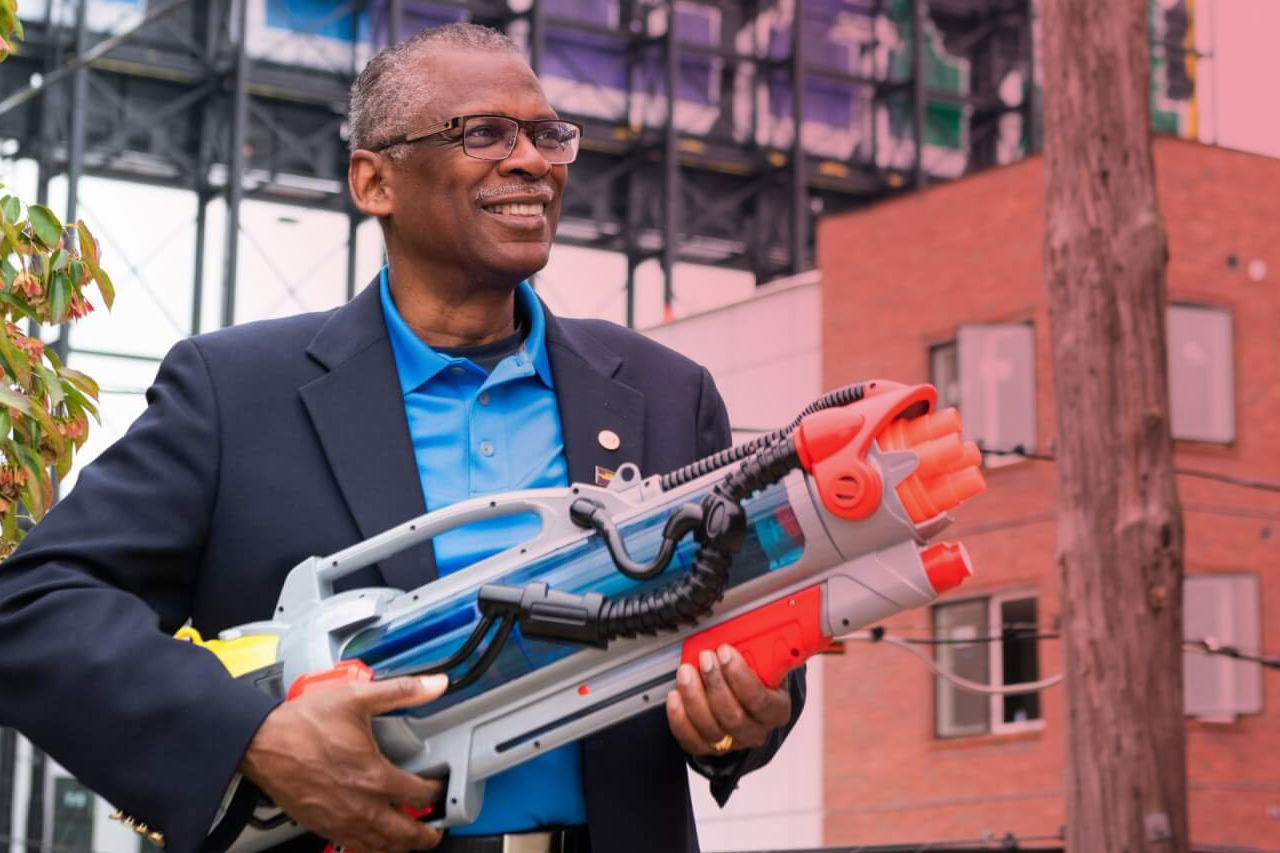 JTEC Founder Dr. Lonnie Johnson is on the cover of the November issue of Military Families Magazine.

Read the article by Melissa Stewart.

Dr. Lonnie Johnson has a magic word — one that often prevents him from becoming saturated by a flood of challenges.

The Air Force veteran and inventor of the Super Soaker water blaster reveals the term when speaking to groups of promising young innovators.

“I get them all in suspense and then I tell them that the magic word is perseverance,” he said. “Don’t give up. Persevere when you run into a tough problem. I use the magic word a lot.”

When you consider Johnson’s success — the entrepreneur and engineer who created a best-selling toy is a 2022 National Inventors Hall of Fame inductee — it might be hard to imagine his struggles.

But Johnson had plenty to overcome, including occasionally talking his way out of trouble as a boy growing up in Alabama. As a curious child, he constantly tinkered, making things like homemade rocket fuel that landed him in the principal’s office when his brother brought it to their school.

“If I were a kid doing some of the things today that I did back then it would be a whole different ballgame,” Johnson said. “I got in trouble, but fortunately, my curiosity was not stymied, and I didn’t get into any trouble I couldn’t recover from.”

In 1968, Johnson introduced his “the Linex” compressed-air-powered robot, which won first prize in a high school science fair held at the University of Alabama at Tuscaloosa. Johnson, who was the only Black student in the competition, said he has often been underestimated due to the color of his skin.

“Swimming upstream was something it seems like I’ve done all my life,” he said.

Johnson’s obstacles never affected his desire to achieve. After graduating with a bachelor’s degree in mechanical engineering and a master’s degree in nuclear engineering from Tuskegee University, where he participated in the ROTC program, Johnson worked briefly as a research engineer at Oak Ridge National Laboratory before joining the Air Force.

He led the Space Nuclear Power Safety Section at the Air Force Weapons Laboratory at Kirtland Air Force Base, New Mexico, before accepting an offer to work as a systems engineer at NASA’s Jefferson Jet Propulsion Laboratory on the Galileo mission to Jupiter and the Cassini mission to Saturn.

When he returned to the Air Force in the early ’80s, Johnson had the opportunity to help develop the stealth bomber program. During all of this career growth, he also found free time to focus on personal inventions. When conducting some experiments on an environmentally-friendly heat pump that used water instead of Freon, he hooked up a nozzle to his faucet.

“I shot this stream of water across the bathroom,” he said. “And I thought, ‘A high-performance water gun would be really, really cool.”

His shot in the dark eventually turned into the Super Soaker sensation — but not before years of trouble shooting … literally.

“I got the idea for the invention, but the design and engineering were more deliberate than accident,” he said.

Johnson said he applied engineering know-how to the potential product and tested iterations of the toy on his family and colleagues.

“I used to take it to office functions when I was in the military,” he said. “It was always a great icebreaker.”

After meeting with many potential investors for seven years, Johnson sold his most well-known invention to Larami Corporation (acquired shortly after by Hasbro Inc.) in 1989, and it became the best-selling toy in America two years later.

Today, Johnson has found happiness in “a hobby that has become a job.” He is the president and founder of Johnson Research and Development Co., his technology development company (along with many spin-off companies) in Atlanta. Here, he and his teams develop energy technology like a new generation of rechargeable battery technology and the Johnson Thermo-Electrical Converter (JTEC), which converts waste heat to electrical energy.

“I tell people that Super Soaker spoiled me,” he said about the toy that has now generated more than $1 billion in sales. “If I want to get involved in something, I want it to be a game changer.”

Johnson said, just like with children, it’s nearly impossible to pick his favorite “game changer” throughout years of innovation. His patents also are the basis of Nerf’s N-Strike line of products.

Johnson now holds more than 100 patents in all.

“Human beings are very creative,” he said. “The difference is some of us follow through and some of us don’t.”

Kids across the world benefit from his perseverance, and today he’s happy to pass along advice and encouragement to the next generation of tinkerers.

To read more about Dr. Lonnie Johnson and check out a list of his patents, visit his website. More information about the National Inventors Hall of Fame can be found on its website.